Hello there, welcome to this blog post. Today I wanted to share something that I have been asked quite a lot about. And that is the proper fate series watching order. Writing down the proper order for watching it might not be that hard, however, I do understand that some people are confused with it. So I wanted to share my knowledge regarding the matter. To explain everything properly, we will have to jump back a bit. And by a bit, I mean, we will have to jump back to the origins of everything.  Everything started with Fate Stay Night. A visual novel from 2004. The visual novel was originally developed by Type-Moon and released on Windows as an Adult Game. In other words, an eroge (hentai game). It might come off surprising to most fans, but that’s how the fate series originated.

Compared to the newer series and their plot, the original story in the visual novel was a bit different. You see, the main character (Shirou) was born with low mana reserves (just like in the anime). In the anime series, they used a ritual to transfer mana to Shirou. However, that is not the case in the visual novel. You see, the visual novel had a different system for transferring mana.  The mana transfer system was done through sexual acts.  The game also has 3 different routes that you can play, and each with a different girl and servant. Fate (Sabe is both the girl and the servant), Unlimited Blade Works (Rin is the female main character and Archer is the servant), Heavens Feel (Sakura as female MC, and rider as the servant).  These are the routes that the anime series will later be based on, so I considered them as an important part of this introduction.

Now that we have explained how the routes in the game went we can move onto the anime series, which is the most important thing we’re talking about that. To explain the order we will have to go down through the anime series that were released under Fate. I will do this in a chronological order. It is important to understand how everything developed throughout the years for the series. This will help us fully get a grasp on how Fate became the series it is today. And how it went from an Eroge to pretty good and well-adapted anime TV series.

There have been two studios that worked on anime for the Fate studios. Studio DEEN followed by Ufotable. However, there are some major differences in the anime the two studios produced. To understand better what happened we need to jump back to 2006. And first, explain what happened before we reach the watching order. However, if you’re in a hurry to get to it, you can skip ahead to the watching order section. We have ordered it chronologically since we believe that is the best way to watch it.

The beginning of fate anime series

In 2006 Studio Deen adapted an anime version of the Fate route visual novel. The adaptation was named “Fate/stay night” and is considered optional in the Fate series watching order. The story in Fate/stay night deviated from the original source, the studio mixed in some elements from Heaven’s Feel and Unlimited Blade Works. The anime itself has a 7.51 score on MAL, you will find mixed reviews about it. However, I do believe that if you have time and you liked the other series. Then perhaps coming back to this after you have watched the important parts might be good. You could enjoy it, or you won’t, that depends on you. If you ever do watch it, do tell me how it was down in the comment section.

At the time some fans were excited about Fate/stay night even if it wasn’t fully following the story. While some, on the other hand, did not like it. However, that all changed in 2010 when Studio DEEN tried to adapt the Unlimited Blade Works route into a movie. The fans were really disappointed about the movie. It got a lot of negative reviews and to this day people say that it is not even worth watching. Unlimited Blade Works route had around 20 hours worth of game-play.  Yet the studio decided to cut out a lot of important details and put everything into 1.5 hours of movie. Instead of perhaps making a new season. that follows the route.  So what should you do? Well, firstly you don’t have to watch it, but you can. It won’t ruin the fate series watching order. Actually, the next anime on the list is where our turning point is with this.

In 2011, Ufotable got their first chance on making an anime adaptation. With that being said, they released Fate/Zero. The story follows the fourth Holy Grail war and focuses mainly on Kiritsugu Emiya. The man who adopted Shirou, there wasn’t much about him in the visual novels. So with this series, the fans were pretty excited to learn about him, his life, and how he got to meet Shirou. The anime also shows Sabers past,  and what she was doing before she met Shirou. Besides this, the anime itself is very good to watch, It has 2 seasons with 25  episodes combined. So the anime is pretty good for a weekend binge watch.

Shirou’s father is a badass guy, and the anime is full of action. The animation is also great, so if you like good visuals and action, then this anime is definitely for you. Some fans argued they did not like the story, but in my opinion, it was good. I advise watching this either first or last. Personally, this was my first one, then I have watched the other important ones. But you can watch them first if you do not want to watch this one, and then come back to watch this. It’s really up to you, however, it is recommended that you check it out. This anime is a prequel in the chronological fate series watching order to Fate/Stay night.

Why the turning point?

I did name it a turning point? But what did I mean by that?  You are probably wondering what I meant, and by turning point I mean Ufotable taking over. Even though some fans were not happy with the story in Fate/Zero, it still had a great impact on the other part of the fans. I loved the series as well. And with that being said, we were really happy when Ufotable announced a new anime adaptation. They were adapting the Unlimited Blade Works route which was later released in 2014. Unlike the 2006 version from Studio DEEN, this adaptation followed the Unlimited Blade Works route closely. Now you have an awesome story that pleases the fans and also incorporates some very badass animation and action.

My most favorite thing about the turning point is that we’re still at this point. We are currently witnessing the turning point for the fate anime series. With Fate/Stay Night: Unlimited Blade Works out everyone was eager for more. Ufotable then announced a new adaptation. They were working on a 3 part movie, Heaven’s Feel route is being adapted for these movies.  The first movies titled Fate/stay night Movie: Heaven’s Feel – I. Presage Flower was released in 2017. The first movie received some positive reviews from the fans, and everyone is excited about the 2nd part. Speaking of part 2, it is actually set to release in 2019.  The movies are the last on our fate series watching order. 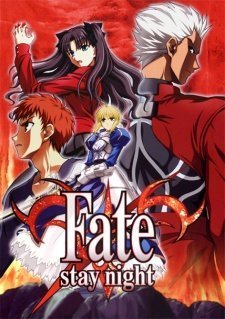 Alright, with that being said, do you remember how I said that you do not need to watch Fate/Stay Night from studio DEEN? Well, that actually depends on what we are talking about. You see, the reason why it was placed in the chronological order is simple. Even though Fate/Stay night deviates a lot from the original Fate route story, it is still the only one that has adapted it so far. There is no adaptation of the Fate route by Studio Ufotable.

They did unlimited blade works and fate/zero which is considered a prequel. That is why we put it before Unlimited Blade Works as it fits that way chronologically. So if you want to watch all the routes, you will have to watch Fate/stay night, or you can skip it, and wait to see if Studio Ufotable will adapt it in the future. Regarding the chronological order, I believed that following the exact events in the story will lead to your best experience.

Demon Slayer has a grasping storyline and no wonder if END_OF_DOCUMENT_TOKEN_TO_BE_REPLACED

So, you must have been binging on Netflix for the END_OF_DOCUMENT_TOKEN_TO_BE_REPLACED

Smut is defined as a style that is regarded as END_OF_DOCUMENT_TOKEN_TO_BE_REPLACED

Manga is full of exciting characters, and today we have END_OF_DOCUMENT_TOKEN_TO_BE_REPLACED

Under this article, I intend to cover some much needed END_OF_DOCUMENT_TOKEN_TO_BE_REPLACED

Welcome to the top 100 hot anime girls list to END_OF_DOCUMENT_TOKEN_TO_BE_REPLACED

Demon Slayer or Kimetsu no Yaiba is here to show END_OF_DOCUMENT_TOKEN_TO_BE_REPLACED